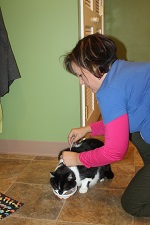 George found me 11 years ago as a tiny, malnourished, black and white ball of fur hiding under the bushes at my son’s babysitter. I have always had a special place for tuxedo kitties – so I knew right away George would be joining my family of kitties. As the weeks went by George never seemed to fit in with everyone else. He would hide during the day and only come out after everyone else went to bed. Feeling badly for George, I started a bad habit of feeding him extra treats and extra meals later at night. I thought I was showing him extra love, but what I was really doing was setting him up for health issues, mainly Diabetes.

In the spring of 2011, I noted that one of the kitties in my house was drinking a lot and the litter boxes were saturated with urine clumps. I separated all 5 cats to their own room for the day with a litter box and bowl of water to find who needed a visit to Gilbertsville Veterinary Hospital. By lunch time I had my answer – George!! I took George into work with me the next day and Dr. Kulig did a complete physical and ran senior bloodwork. After his examination, George was found to be 19 pounds, had harsh lung sounds due to his weight, and his blood glucose was elevated. I had a diabetic cat!! George was placed on insulin and a special diet high in protein. I was also advised to try to get him to loose some weight thru diet and exercise, monitor his blood glucose levels, and to keep him on a strict schedule of insulin administration and food.

Now two years later, a normal day for George and I starts early at 6 am, when he is given a ¼ a cup of food and 1 unit of insulin. George does not mind the injections and loves his yummy food. After breakfast George will go back to his sleeping spot under my bed. Later in the morning after everyone else has left for school and work and the other kitties have taken their spots in the sun for the day, I will encourage George to come out and have some play time with me. He enjoys his stuffed penguin, which he bites and throws in the air, and loves to chase after golf balls rolled across the hardwood floor. We will play together for about an hour to encourage physical activity and help keep his weight down. After a great play session George goes back to his sleeping spot under my bed or if he is feeling brave will find a sunny spot on the bed and take a well deserved nap. At around 6 pm, while our children are eating dinner, I will go and feed George and give him his evening shot. Most days are great and he is eager to eat but every once in a while I struggle to get him to eat even a quarter of his food. On days when I feel George is not acting like himself I will check his blood glucose with an at home monitor. I prick a small area on his ear to get the blood sample. On this day his glucose levels were normal. George was most likely just having an extra nervous day preventing him from eating well.

Life with a Diabetic kitty is sometimes not easy but most days it is just part of my normal schedule. Since being diagnosed in the spring of 2011, George has been able to lose 3 pounds. Every 6 months, he goes in for his check up and his blood glucose levels are checked.  Thankfully they have been in the normal range. George and I have learned an important lesson that food does not equal love.