It is “Adopt a Shelter Cat” Month!!!  How can I put into words how much I love cats? I’m not sure that I can. With the immense numbers of cats in our local shelters, I plead with you to give a kitty a chance!! They’re amazing friends, and even if you’re “not a cat person”, a rescue kitty can change your mind and make a cat-lover out of you!! It’s hard to explain why cats are so amazing.  Some cats will come when called, play fetch, can be trained to sit, use the toilet, etc.  Some cats, just like some dogs, prefer to be loners and do their own thing. I think the biggest selling point for a lot of cat lovers (other than the immense cuteness, of course) is that they are so self-sufficient. You can go away for a weekend and they can take care of themselves at home for a couple days. You just need to make sure there is clean water, litter, and plenty of food! They don’t eat much, they’re quiet, no need to go outside in the rain so they can go to the bathroom, they’re just easy to care for pets! 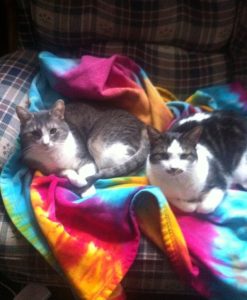 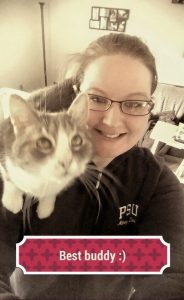 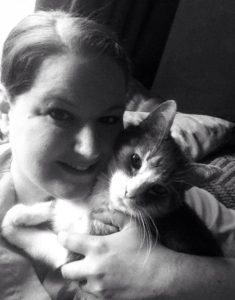 I have ALWAYS had a love of furry felines as long as I can remember. I got my first kitten when I was 8 years old from one of my mom’s coworkers. Her name was Mittens and it was love at first sight for my sister and me. We did everything with this cat, we loved her to pieces, and she was an extremely tolerant cat to put up with an 8 and 4 year old who enjoyed playing dress up with her every day. She slept with either my sister or I, and both of us knew from then on we would probably always have a cat in our lives.

Later, I was working at my first job at a pet store, when I absolutely fell IN LOVE with a kitten that had a crooked broken tail and constant upper respiratory infections.  I knew I just had to take that little guy home. It took a lot of convincing to get my mom to let me bring him home, but I finally got my little Gus!! Gus and Mittens got along for the most part.  A lot of my friends said if it wasn’t for Gus’ crooked tail they wouldn’t have been able to tell them apart.  They were both gray and white domestic short hairs. Unfortunately, Mittens succumbed to liver and kidney disease at 16 years old.  It was one of the hardest moments of my life.

When my sister and I were both in college and sharing an apartment, my sister rescued a beautiful little kitten named Bella. She was feisty!! Gus took some time to adjust to the little kitten, but they eventually tolerated each other. After about 2 years, I added another furry guy to our family. I was working at State College Veterinary Hospital when a stray came in. The owner of the practice had found the emaciated Tomcat.  He had a plethora of health issues but was Feline Leukemia and FIV free and so was able to be adopted.  After a few weeks at the hospital, I became very attached to him.  He looked a little pathetic as he was smelly and flea infested, had wounds everywhere, and was just a sneezy/snotty mess.  He LOVED attention so I’d put on a gown and hang out with him, even on my days off! Before he officially became mine, he was neutered, had his teeth cleaned, and was brought back to great health! I named him Luigi and he became a part of my family. My sister and I loved him from the start, and Bella was pretty tolerant, but it took about 4 to 5 months for Gus to even be in the same room! It’s funny because now they are absolutely inseparable!!  Ah, brotherly love!

Eventually I moved home, brought Gus and Luigi with me, and my sister had her own apartment where she lived with Bella and 2 more adopted cats.  We both still LOVE our shelter cats. Why not celebrate “Adopt a Shelter Cat” Month and rescue a kitty?